When life hands you cabbage…

What to do when your domestic partner goes out for salad makings and comes home with a giant head of cabbage instead? Cole slaw! Duh.

I’ve never made slaw before, so to the internet I went. The fridge and cupboards were a bit barer than usual, so I was looking for a recipe that was short on ingredients – or long on ingredients I could ignore. On epicurious I found one that was a bit of both:  a delightful slaw with a dijon-cider dressing. I had both of those! My bastardized recipe:

Mix the dressing ingredients, dress the cabbage, add some salt and pepper and eat. Or chill and then eat. Or eat some, then chill the rest. You get the picture.

I used to find soups terribly intimidating but over the last few months have learned to overcome my fear, turns out they are dead easy.

I can therefore heartily recommend one of my favourite websites for recipes, www.bbcgoodfood.com

My latest success was their all-in-one chunky winterbroth, I didn’t even use pesto and my spinach, following Eve’s advice, was frozen spinach, not fresh. 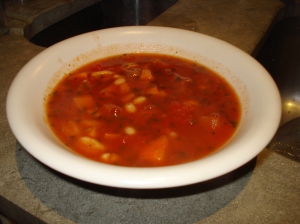 We spent last weekend wandering around Vienna with the firm intention of lazing around cafes and eating cake. Which is pretty much what we did. I was a bit underwhelmed with the sweets, but man the coffee was good, if served in frustratingly small cups.

On the restaurant front we stuck to ordering things we could translate from the menu – luckily we learned the word for chicken on day one. This rather unadventurous strategy meant there was a lot of wiener schnitzel, which isn’t an entirely bad thing:

The schnitzel has eyes

A few more pics after the jump. END_OF_DOCUMENT_TOKEN_TO_BE_REPLACED 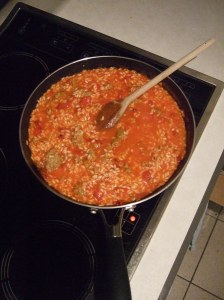 Some recipes I’ll attempt only once.  Others will enter my cooking rotation in their intended form.  And a rare few serve as taking-off point for countless variations.

This Epicurious recipe has served as the base or inspiration for numerous permutations since I first tried it a few years ago.  It’s a quick and easy weeknight recipe, and I almost always have the necessary ingredients to hand.  END_OF_DOCUMENT_TOKEN_TO_BE_REPLACED