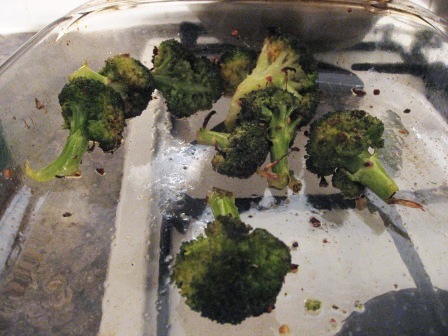 Spread the florets out in a dish, cover with a little bit of olive oil, sprinkle with some crushed chilis, little bit of salt, and stick in a hot oven for 10-15 minutes, stirring once.

*For broccoli, I mean. It’s not like I had seconds. But I didn’t mind firsts. 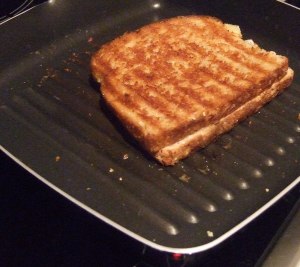 I’ve eaten nothing this week that required real cooking, but sometimes the simplest food is the most satisfying.  I love my grilled cheese sandwiches, with their crispy browned-butter outsides and their hot cheesy insides.  I use my favourite cheese, an extra-mature Canadian cheddar, and add a bit of depth with a generous splash of Worcestershire sauce.  Yum.

An ode to the gummibear

Sticking with my German theme, I’ll need to dedicate a short entry to the beauty that is the gummibear. And please believe me when I tell you that the German gummibear tastes different from the one for sale in the UK.

It is fruitier (you can actually identify the fruits they are meant to taste of), they are darker in color and use less E’s (though I’m afraid you can still find plenty in there). They are also known as Goldbaeren in Germany (Goldbears) and if that isn’t juicy enough, try the Saftbaeren (also made by Haribo, the good people who make my beloved Goldbears, sorry for the blatant advertising) which are made with even more fruit juice (hence the title, they are called Juicebears). The german deli http://www.germandeli.co.uk can help you

if you want to try the best gummibears out there. Though be warned – once you had the original it’s hard to sully your palate with the international gummibear.

For your perusing pleasure.

It had to happen…

…I’ve had a request that the Bacon Explosion kick off this year’s bbq season (assuming there is one, I never count my London summer chickens before they hatch).

A story in the LA Times today (with the truly terrible headline ‘Joy of Cooking’ or ‘Joy of Obesity’?) points to a new study finding that the calorie count of 14 selected recipes from Joy of Cooking increased an average 44% between the 1936 and 1996 editions. 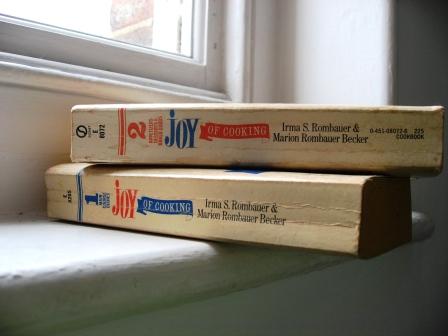 Researchers looked at recipes including beef stroganoff, waffles, mac and cheese and goulash in each of the seven editions to chart how American home cooking has evolved. Similar trends were found in other classic cookbooks.  An odd little study, but it’s interesting to see cultural shifts reflected this way. For instance:

The study found that some of the added calories in the dishes came from a substitution of ingredients — extra meat instead of vegetables, for example. Back in the day, meat was expensive, so less of it was used, he said.

Cultural shifts may have also had an effect on recipe ingredients and portion sizes, Wansink added. Families have gotten smaller, so a dish that once was consumed by eight people is now consumed by four.

And because sizes of dinner plates have grown over the years, a standard 2-ounce portion of pasta can now look diminutive.

The past decade has seen a huge shift in awareness about nutrition. Recent versions have featured more fresh ingredients, and the 2006 edition has a chapter on nutrition. Yet far and away the biggest increase in average calorie content came between the 1997 and 2006 editions. We Americans are a confusing bunch.

I’d love to do a little more reading on this – any cheeseclothers have a copy around to compare with my 1963 edition?

There are some kitchen tasks that I put off because they are truly arduous (cleaning the oven and defrosting the freezer, I’m looking at you).

And then there are the tasks that I put off because I’m lazy.  Cleaning the microwave and wiping down refrigerator shelves fall into this category.  Neither of these pose any threat beyond grossing out fastidious guests (luckily, none of my friends seem to fit that description.  Or they’re too polite to tell me.  Either way, I win).

However, I realised last night that ignoring some things can become dangerous.  When cooking a toast accompaniment for my scrambled egg dinner (it’s haute cuisine week at my place)… END_OF_DOCUMENT_TOKEN_TO_BE_REPLACED

I can has cheezcloth?
Create a free website or blog at WordPress.com.